The main components of Helm are:

Helm works by the user providing parameters (most of the time via a YAML file) against a Helm chart via the CLI. These parameters get injected into the Helm template YAML to produce a consumable YAML that us deployed to the Kubernetes cluster. 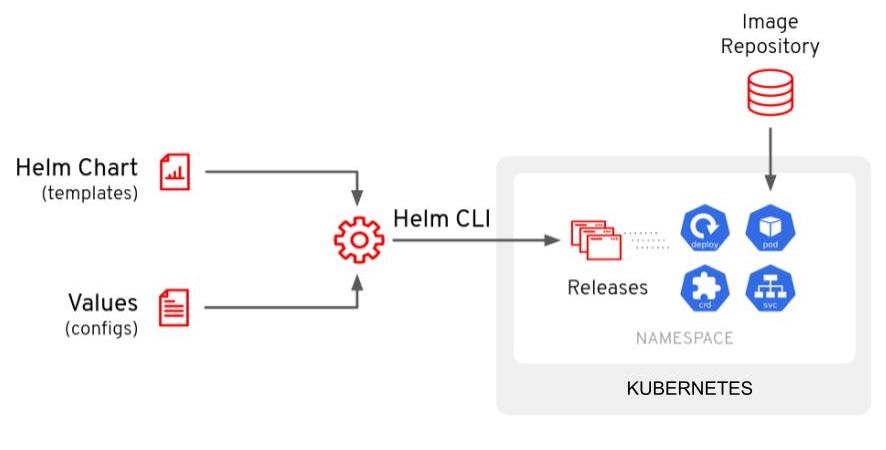 Argo CD has native support for Helm built in. You can directly call a Helm chart repo and provide the values directly in the Application manifest. Also, you can interact and manage Helm on your cluster directly with the Argo CD UI or the argocd CLI.

There are two ways to deploy a Helm chart with Argo CD. The first is to use an Argo CD Application, and specify the parameters. We will be deploying this application. Taking a look at .spec.source.helm, you'll see that you can provide the parameters directly in this manifest. Snippet:

Let's break this .spec.source.helm section down a bit:

This can be used to deploy the Helm chart on to your cluster, which is like using helm install ....

Once you've applied this Argo CD Application manifest, it should deploy the specified Helm chart. Looking in the Argo CD WebUI, you should see the following: 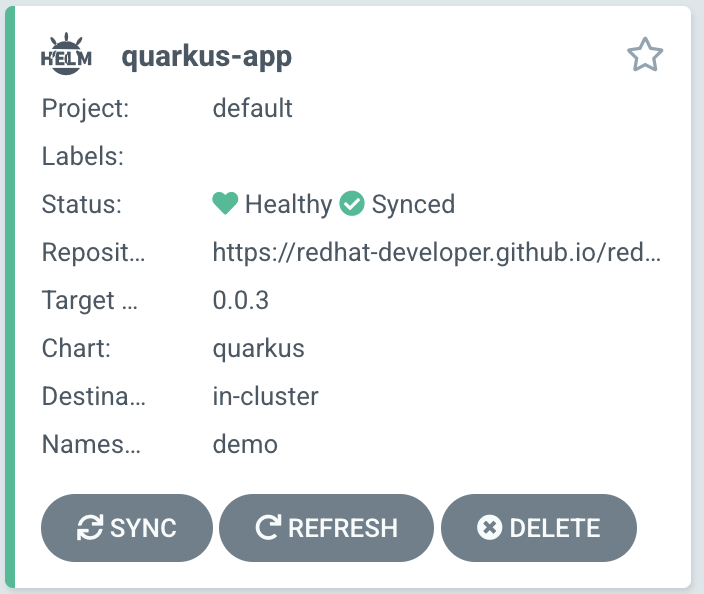 Pay special attention to the Helm (⎈) logo, indicating that it's a Helm chart being deployed with Argo CD.

NOTE: In the next example there will only be one chart, but you can list multiple charts. This is helpful for when your Application is made up of several Helm Charts.

Taking a look at the example repo in the 02-working-with-helm/repo/directory. You will see two files. A Chart.yaml file and a Values.yaml file.

The Chart.yaml file, is creating an "empty" Helm chart and adding the Helm chart you want to deploy as a dependency in the dependecies secion.

The values.yaml file specifies the values you want to pass to the Helm chart.

We will be deploying this Helm Chart with Argo CD using the WebUI. First click on the + NEW APP button on the Argo CD UI. And fill out the following.

After a while, you should see the Application synced and healthy. Note that this time, you will see this as a "Git" Application (denoted by the Git logo) instead of a Helm Application. 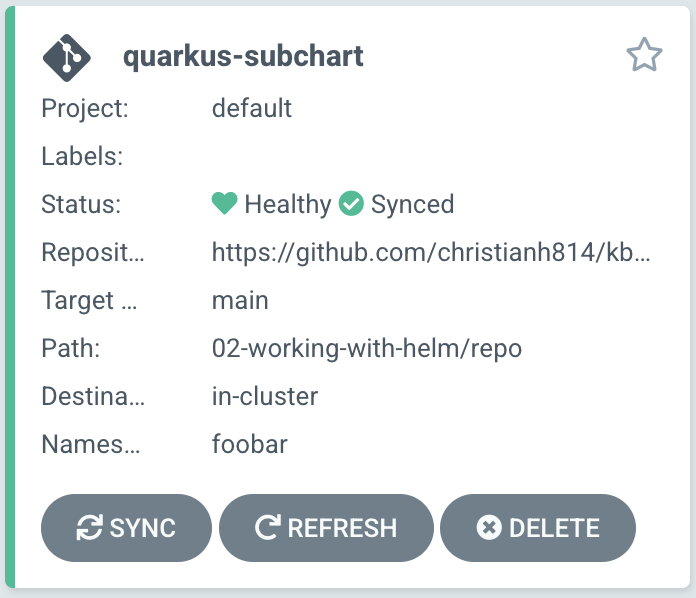 Taking a step back with this method; This is more GitOps friendly as now the state of your deployment is stored in a git repo. You can now use git workflows to update this application if, for example, you want to change the image or the number of replicas. You can now PR into this repo as you would in a GitOps workflow.